Rasa - Dozens of demonstrators from all walks of life have scuffled with police in Indonesia during a protest rally in solidarity with Myanmar’s prosecuted Rohingya Muslims and against its government’s clampdown on the desperate minority. 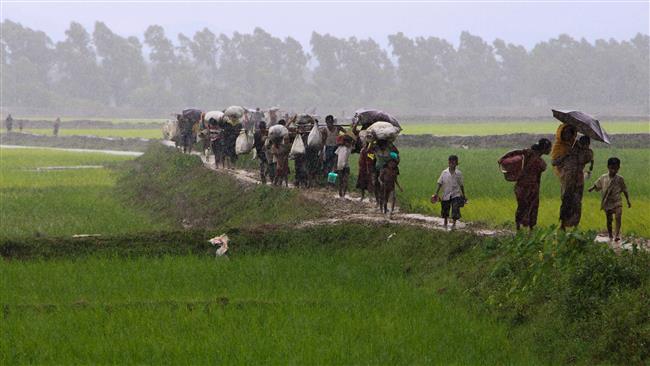 RNA - Protesters marched on the Myanmar Embassy in the capital Jakarta on Saturday and finally convened in front of the diplomatic mission, shouting slogans in support of Rohingya Muslims.

They also chanted, “Save Muslim Rohingya” and “Expel the Ambassador of Myanmar” and shouted slogans against the government of Aung San Suu Kyi, Myanmar's state counselor, strongly calling on the Southeast Asian country to put an end to violence against the minority.

Angry demonstrators, most of them from the Community of Professional Care for Rohingya, also stepped on posters of Suu Kyi, which was labeled, “The Inhuman Lady,” before setting them on fire.

Scuffles broke out when police stopped protesters from getting closer to the embassy. ​​The blockade, however, did not end in a riot.

“What the Myanmar government has done is beyond the limits of humanity,” said coordinator Irfan Gani, adding, “We urge the government to recall the Indonesian ambassador to Myanmar, which is a form of our resistance showing that Indonesia does not approve of human rights violations.”

Separately, Indonesia's largest Muslim organization, called Nahdlatul Ulama, which claims to have over 50 million members, also called on the Indonesian government and the United Nations to play a more effective role in supporting and saving the Rohingya.

“As a country with the largest Muslim population, Indonesia should take part in saving the Muslim Rohingya group from Myanmar's military violence,” said Chairman Saifullah Yusuf.

Rohingya Muslim refugees from Rakhine state in Myanmar walk along a path near Teknaf in Bangladesh, September 2, 2017. (Photo by AFP)

A new wave of violence broke out in Myanmar on August 25, when dozens of police and border outposts in the state of Rakhine came under attack purportedly by a group claiming to be the defenders of the Rohingya minority. The alleged assaults, which killed a dozen of Myanmar's troops, were launched in response to a government clampdown in the area, where over a million Rohingya are based.

The full-scale crackdown by government troops triggered a fresh influx of refugees toward neighboring Bangladesh, though the country has already sealed off its eastern border for desperate refugees.

However, the UN said in a statement on Saturday that nearly 60,000 people, mostly Rohingya, had crossed into Bangladesh in the previous eight days, desperately attempting to flee spiraling communal violence in Rakhine. Some 400 people have also lost their lives since the new wave of violence erupted.

The volatile Rakhine, located northwest of the Buddhist-majority Myanmar, has been the scene of communal violence since 2012. Many of the Muslims have lost their lives while tens of thousands have been displaced as a result of attacks by Buddhists. The refugees largely live in camps in dire conditions.

Rakhine has also been under a military siege since October 2016, when the government used a purported deadly militant attack on border guards back then as a pretext to enforce the siege. There have been numerous eyewitness accounts of summary executions, rapes, and arson attacks by security forces against the Muslims since the crackdown began.

The UN has described Rohingya Muslims as the “most persecuted minority group in the world.”

Myanmar is under fire by the UN and other rights group

Tags: Rohingya Myanmar
Short Link rasanews.ir/201oPj
Share
0
Please type in your comments in English.
The comments that contain insults or libel to individuals, ethnicities, or contradictions with the laws of the country and religious teachings will not be disclosed