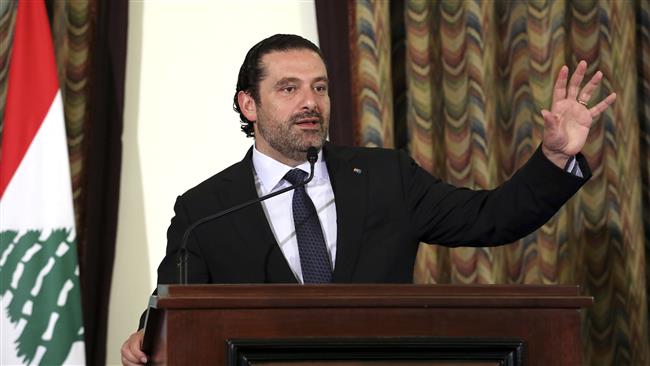 RNA - In an interview with French daily Le Monde, which was published on Friday, Hariri said Israel “knows very well there are no missile factories in Lebanon.”

During a meeting with United Nations (UN) Secretary General Antonio Guterres in Jerusalem al-Quds earlier this week, Israeli Prime Minister Benjamin Netanyahu had claimed that Iran was “building sites to produce precision-guided missiles... in both Syria and in Lebanon.”

Israel’s minister of military affairs, Avigdor Lieberman, also echoed Netanyahu’s accusations against the Islamic Republic in a meeting with the UN chief, saying Iran was “working to set up factories to manufacture accurate weapons within Lebanon itself.”

Later, Israeli media claimed that Hariri had raised “objections” and was acting to stop the alleged factory construction.

In the Le Monde interview, however, the Lebanese prime minister rejected the allegation altogether.

“The Israelis are used to conducting campaigns of deception,” he said.

As another case in point, Hariri referred to and dismissed Israeli claims about the Hezbollah resistance movement.

Last month, in a meeting with Russian President Vladimir Putin in Russia, Netanyahu accused Iran of trying “to establish a foothold in Syria.”

According to a Russia Today report back then, Netanyahu was told that Moscow, “which views Iran as key to resolving the [Syrian] crisis,” would “note Israeli interests,” in what likely amounts to a diplomatic dismissal of the Israeli claims.

Russia and Iran have been in close coordination to assist the Syrian government’s anti-terror fight.

Tags: Israel Lebanon Hezbollah
Short Link rasanews.ir/201oPb
Share
0
Please type in your comments in English.
The comments that contain insults or libel to individuals, ethnicities, or contradictions with the laws of the country and religious teachings will not be disclosed