Rasa - A federal appeals judge has slammed the Donald Trump administration’s immigration policies, saying even the “good hombres” are no longer safe in the United States. 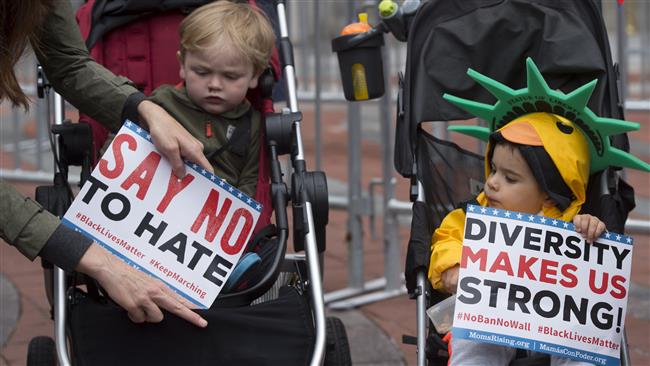 RNA - In an impassioned opinion on Tuesday, Judge Stephen Reinhardt of the 9th Circuit Court of Appeals said an administration order to deport a man who entered the US nearly three decades ago and became a respected businessman in Hawaii was "inhumane" and against American values.

"President Trump has claimed that his immigration policies would target the 'bad hombres,'" Reinhardt said. "The government's decision to remove Magana Ortiz shows that even the 'good hombres' are not safe."

The rebuke came as the appeals court turned down a request from Andres Magana Ortiz to delay his deportation.

Although Ortiz immigrated to the US illegally, he has lived in the country since 1989 and has built a life as a successful businessman in coffee farming industry. The 43-year-old, whose wife and children are all US citizens, has worked with the US government to help fight pests that destroy coffee crops.

Reinhardt said the 9th Circuit did not have the authority to block the deportation.

"The government's insistence on expelling a good man from the country in which he has lived for the past 28 years deprives his children of their right to be with their father, his wife of her right to be with her husband, and our country of a productive and responsible member of our community," the judge wrote.

"The government forces us to participate in ripping apart a family," he added. "Three United States citizen children will now have to choose between their father and their country."

Immigration authorities began removal proceedings in 2011, but Ortiz was granted permission to stay in the US and pursue a path to legal residency. Meanwhile, his family filed for permission to allow Ortiz to remain as the relative of an American citizen.

In March, while those applications were still pending, the government ordered Ortiz to report for removal. He has been fighting the order in court for the past several weeks with no success.

Ortiz is set to be deported to Mexico. Under US immigration law, he will be barred from returning to the US for ten years.

While running for office, Trump promised to reform the US immigration system and close the borders to “bad dudes.”  His executive order banning citizens of six Muslim countries from entering the US has been suspended by federal courts.

Tags: US Trump
Short Link rasanews.ir/201nrg
Share
0
Please type in your comments in English.
The comments that contain insults or libel to individuals, ethnicities, or contradictions with the laws of the country and religious teachings will not be disclosed