Rasa - US President Donald Trump says he wants to expand America’s nuclear arsenal to ensure it is at the "top of the pack," saying the US had fallen behind in its nuclear weapons capacity. 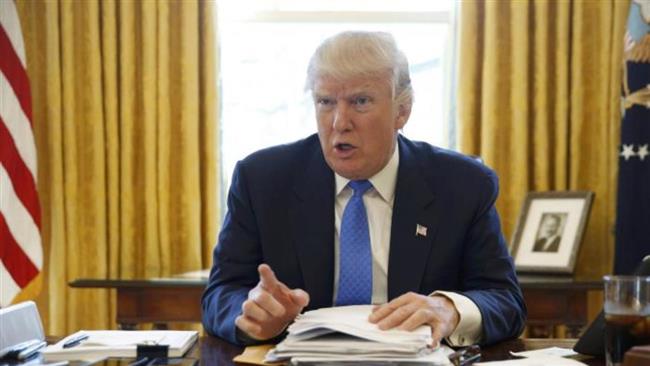 RNA - In an interview with Reuters on Thursday, Trump said he is against a "one-sided" nuclear agreement with Russia that would limit the deployment of atomic warheads.

“If countries are going to have nukes, we’re going to be at the top of the pack,” he added.

The new president also complained about Moscow’s deployment of a cruise missile in violation of an arms control treaty and said he would raise the issue with Russian President Vladimir Putin when and if they meet.

Speaking from behind his desk in the Oval Office at the White House, Trump also declared himself "very angry" at North Korea's ballistic missile tests and said China could solve the threat posed by North Korea "very easily if they want to."

Trump has told Putin he does not want to renew a 2010 nuclear arms reduction treaty between Washington and Moscow because the deal was bad for the United States.

During his first call as president with Putin on January 28, Trump said the New START treaty favored Russia, Reuters reported earlier this month, citing current and former US officials with knowledge of the call.

New START gives both countries until February 2018 to reduce their deployed strategic nuclear warheads to 1,550, the lowest level in decades. However, it does not limit the number of operationally inactive nuclear warheads that remain in the high thousands in both the US and Russian stockpiles.

Tags: US Putin Trump Nuclear
Short Link rasanews.ir/201nFK
Share
0
Please type in your comments in English.
The comments that contain insults or libel to individuals, ethnicities, or contradictions with the laws of the country and religious teachings will not be disclosed