Rasa - Hundreds of pro-Palestinian protesters have taken to the streets of the Australian city of Sydney to express their outrage at Israeli Prime Minister Benjamin Netanyahu’s visit to the country. 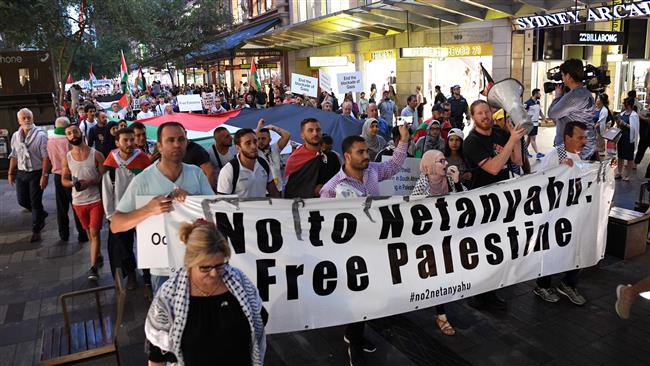 A banner unfurled in the demonstration depicted Netanyahu with a Hitler moustache and the word "Fascist" written underneath.

Netanyahu arrived in Australia on Wednesday, kicking off a four-day visit to mark the first time a serving Israeli premier has visited the country.

Australian Prime Minister Malcolm Turnbull wrote an opinion piece in The Australian newspaper and rebuked the UN for adopting what he labeled "one-sided" resolutions critical of Israeli settlement expansion.

"My government will not support one-sided resolutions criticizing Israel of the kind recently adopted by the UN Security Council and we deplore the boycott campaigns designed to delegitimize" Israel, he said, referring to the Security Council Resolution 2334, which was adopted last December denouncing the Israeli settlements as a “flagrant violation of international law.”

In a joint press conference with his Australian counterpart, Netanyahu said he was delighted to read Turnbull’s article. He further praised what he called Australia’s courage for its decision to “puncture UN hypocrisy,” adding that Australia was a "very good" friend to Israel.

During Thursday's rally, which was organised by the local Palestine Action Group, the demonstrators slammed Canberra’s stance on Israel.

Pro-Palestinian author and Australian lawyer, Randa Abdel-Fattah, said the protesters had gathered in Sydney "to oppose Australia's support for Israel, for a racist apartheid" regime.

"It's disgusting to see that some of our Australian leaders have rolled out the red carpet and welcomed a war criminal into Australia," she said, adding, "But there are so many Australians who are against this.”

The protesters tried to march on Netanyahu's hotel, but they were blocked by Australian police.

Ahead of Netanyahu's trip, some 60 academics, business leaders, members of the clergy and former politicians signed a letter saying Australia should not welcome the Israeli prime minister.

Tags: Israel Australia
Short Link rasanews.ir/201nFG
Share
0
Please type in your comments in English.
The comments that contain insults or libel to individuals, ethnicities, or contradictions with the laws of the country and religious teachings will not be disclosed