Rasa - Iran’s Islamic Revolution Guards Corps (IRGC) has unveiled a new model of anti-helicopter mines during its recent military drills that were held in the eastern and central parts of the country. 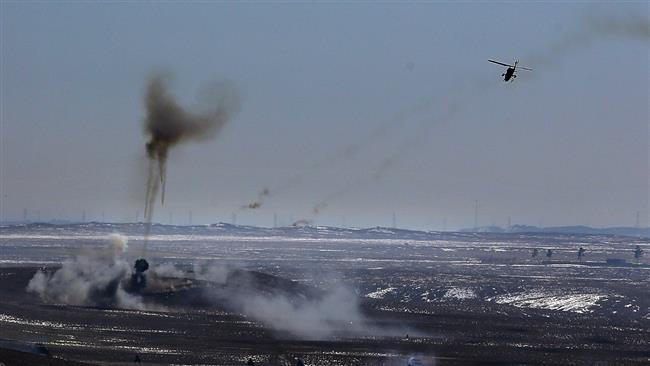 RNA - The mine named Sa’eqeh (thunderbolt) was successfully put to test during the Payambar-e-A’azam (Great Prophet) 11 drills in Taybad County of the northeastern province of Khorasan Razavi.

Sa’eqeh has been designed and manufactured by Iranian experts with the aim of enhancing deterrence against potential airborne intrusion.

The remote-controlled anti-helicopter mine, which contains several explosive projectiles, is planted on the ground to target intruding flying objects up to an altitude of 500 meters.

Following the explosion of the mine’s main part, the small projectile bombs will then fly and explode in a vertical line, enabling them to destroy the target or inflict serious damage on it.

The mine does not need separate radar systems to detect the intruding flying object.

This is the third generation of Iran’s domestically-manufactured anti-chopper mines after J-AHM and Sayyad models.

Sa’eqeh was tested during the final stage of Payambar-e-A’azam 11 drills on Wednesday, when the IRGC’s Saberin Special Forces Brigade struck mock enemy positions and vehicles.

The operation was being backed by the Corps’ rocket fire units, which launched state-of-the-art and precision-guided projectiles at designated targets.

Iran says its military might is defensive in nature and poses no threat to any other country.

Tags: IRGC Iran
Short Link rasanews.ir/201nFD
Share
0
Please type in your comments in English.
The comments that contain insults or libel to individuals, ethnicities, or contradictions with the laws of the country and religious teachings will not be disclosed