‘I’m a Muslim Too,’ New Yorkers rally against Muslim ban

Rasa - Hundreds of New Yorkers have staged a rally to voice solidarity with Muslims, in the wake of President Donald Trump’s entry ban against people from some Muslim nations. 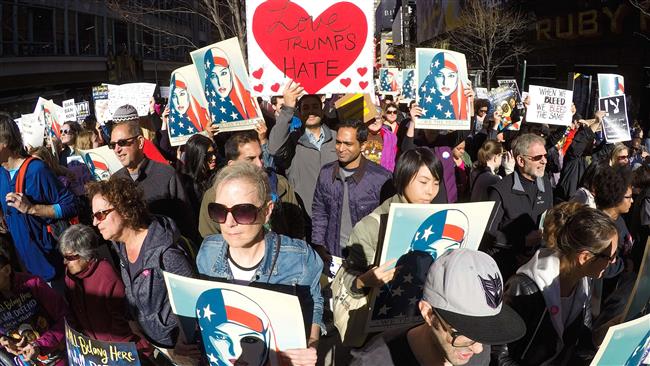 “Here’s the message I want to give as mayor of this city, to everyone who’s here. Regardless of your faith or your background or where you were born, this is your city,” de Blasio said.

Sarandon also took the stage, calling on all Americans to speak up against Trump, arguing that silence makes them “complicit.”

Simmons, meanwhile, said that Trump was going to “leave a legacy of hate in America,” although the country was moving towards “greater love.”

Also on Sunday, thousands of demonstrators across the US marked President’s Day by staging rallies against Trump’s presidency.

Marking the federal holiday, which is held on the third Monday of February, protesters descended upon the streets of at least 25 cities to protest the new Republican president’s dividing policies on immigration.

The Muslim ban, which was introduced on January 28, has stirred outrage both inside the US and abroad.

Traditional US allies like the UK and Germany have also criticized the ban, asking the Trump administration to reconsider it.

Millions of People across the world have held demonstrations to condemn the ban, which also barred Syrian refugees and halted all refugee admission to the US for 120 days.

The ban was put on hold by a federal judge earlier this month. Trump has pledged to introduce a revised version of the measure after losing an appeal bid to reinstate it.

Tags: Muslim Trump New York
Short Link rasanews.ir/201nDe
Share
0
Please type in your comments in English.
The comments that contain insults or libel to individuals, ethnicities, or contradictions with the laws of the country and religious teachings will not be disclosed