Rasa - US Vice President Mike Pence is repeating the Trump administration’s allegations against Iran and the Joint Comprehensive Plan of Action (JCPOA). 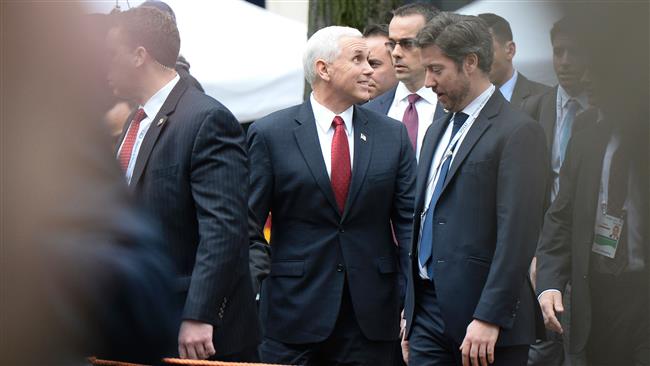 RNA - Addressing the 53rd session of the Munich Security Conference in Germany, the new vice president kept up his boss’s hostile rhetoric, claiming that the nuclear deal between Tehran and the world powers, including the US, has given Iran “additional resources” to “destabilize” the region.

The hawkish Republican also accused Iran of being “the state sponsor of terrorism.”

“Let me be clear again! Under President Trump, the United States will be fully committed to insuring that Iran never obtains a nuclear weapon capable of threatening our countries, our allies in the region, especially Israel,” asserted the former Indiana governor.

The peaceful nature of the nuclear program has been emphasized by Tehran time and again, even before the JCPOA was clinched with the world powers in 2015.

Pence’s anti-Iran remarks came days after Trump met with Israeli Prime Minister Benjamin Netanyahu in Washington, where he continued the regime's efforts to team up against Tehran.

The Trump administration has been stepping up its anti-Iran rhetoric, referencing a “bad deal” with Tehran and accusing the Islamic Republic of supporting “terrorism.”

Daesh Takfiris were among the militants initially trained by the CIA in Jordan in 2012 to destabilize the Syrian government.

Tags: US Iran JCPOA middle east
Short Link rasanews.ir/201nDE
Share
0
Please type in your comments in English.
The comments that contain insults or libel to individuals, ethnicities, or contradictions with the laws of the country and religious teachings will not be disclosed