Rasa - Iranian Foreign Minister Mohammad Javad Zarif says when Israel, the only regime in the Middle East that has nuclear weapons, “whines” about Iran’s defensive program, the brouhaha can only be taken as fake. 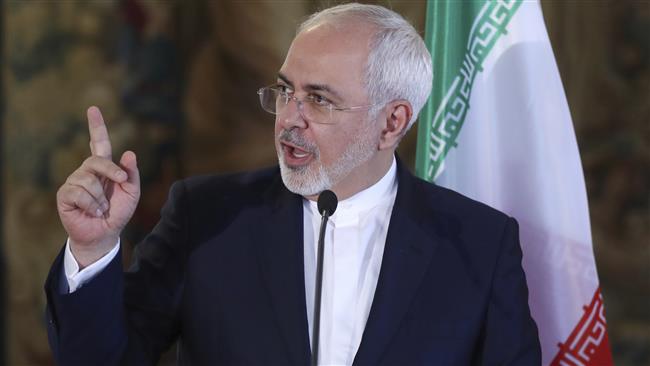 RNA - “The only regime in ME with nukes, ICBMs & a history of aggression whines about Iran’s means of defense. Fear-mongering hype IS fake news,” Zarif said in a post on his Twitter account late on Friday.

On Thursday, Israeli Prime Minister Benjamin Netanyahu told Fox News that the regime and the US had a “grand mission” to confront what he claimed to be the threat of a nuclear Iran.

This came one day after Netanyahu and US President Donald Trump held a joint news conference, during which the latter termed the nuclear deal with Iran as “the worst” agreement ever and pledged to impose new sanctions on Iran to prevent the country from, according to him, developing a nuclear weapon.

Trump also described the alleged threat posed by Iran’s nuclear program as one of the “enormous” challenges facing Israel.

The claims about Iran’s nuclear program, which, following a historic nuclear deal between Iran and six world powers, have been coming out of the mouths of the Israeli regime and the new US administration only, are largely ignored by the European and Asian powers that were involved in shaping the deal.

While Iran repeatedly said that it never pursued the building of nuclear weapons and that it only sought nuclear technology for peaceful purposes, the country agreed under the deal to apply expanded limits to its nuclear activities and provide enhanced access to international atomic monitors to its nuclear facilities.

That effectively removed the concerns of the Western countries that had been involved in a dispute with Iran over its nuclear program for over a decade. Thus, barring the new US administration, the parties to the nuclear deal with Iran have all been stressing that the deal must stand. The Israeli regime and the Trump administration, however, continue to cry foul.

Earlier, Iran’s Foreign Ministry spokesman Bahram Qassemi had denounced the anti-Iran claims as “a repetition of hollow and worthless allegations,” adding that Israel’s atomic weapons arsenal represented “the biggest threat to peace and security in the Middle East and the world.”

In a related development on Friday, European Union foreign policy chief Federica Mogherini stressed the importance of the nuclear deal, which is officially known as the Joint Comprehensive Plan of Action (JCPOA).

During separate meetings with Zarif and Director General of the International Atomic Energy Agency (IAEA) Yukiya Amano on the sidelines of the Munich Security Conference, Mogherini discussed the implementation of the nuclear deal.

Mogherini stressed that the JCPOA was “delivering on its objectives” and “reiterated the need for all sides to firmly stick to their commitments under” the accord.

She further underlined the need for “a full and effective implementation by all sides throughout the lifetime of the agreement.”

Iran and the P5+1 countries — the United States under its previous administration, Britain, France, China, Russia, and Germany — struck the JCPOA on July 14, 2015 and started implementing it on January 16, 2016.

Under the agreement, and in return for the commitments made by Iran, all the nuclear-related sanctions against the Islamic Republic were terminated.

Tags: Iran Zarif Israel
Short Link rasanews.ir/201nCs
Share
0
Please type in your comments in English.
The comments that contain insults or libel to individuals, ethnicities, or contradictions with the laws of the country and religious teachings will not be disclosed