Rasa - Dozens of Palestinians have staged protest rallies across the occupied West Bank, denouncing the construction of Israeli settlements and a separation wall. 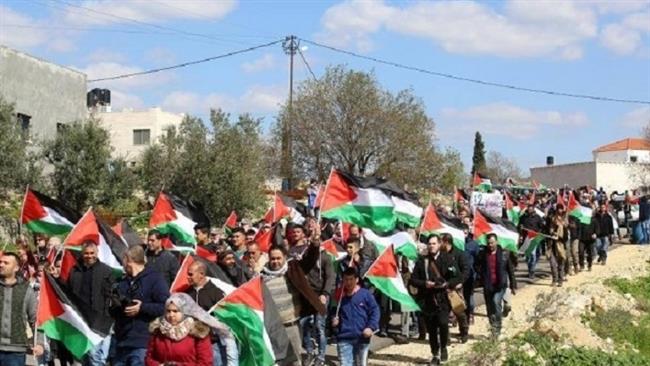 RNA - On Friday, weekly demonstrations were held in the villages of Bil’in and Ni’lin near the central city of Ramallah, and in the village of Kafr Qaddum near the northern city of Nablus.

Israeli forces clashed with the demonstrators and temporarily detained several children. A young Palestinian man was hospitalized after being wounded in the clashes.

In Ni’lin, dozens of the protesters suffered tear gas inhalation.

Israeli regime forces also raided Kafr Qaddum with military vehicles and bulldozers to break up the demonstration. Heavy clashes were reported in the village, with young protesters throwing stones at Israeli vehicles and setting fire to rubber tires. No injuries or arrest have been reported yet.

Israel began building the barrier of walls and fences inside the occupied West Bank in 2002. Tel Aviv said it wanted to prevent Palestinians from infiltrating into the Israeli settlements, but Palestinians consider the move as yet another violation of their rights.

The Friday demonstrations come as the Israeli regime is under fire for its settlement activities in the occupied Palestinian territories.

Since January 20, when US President Donald Trump, an ardent supporter of Israel, took office, Tel Aviv has launched a major land grab drive in defiance of global calls to stop its settlement activities on occupied Palestinian lands.

Over 230 settlements have been built since the 1967 Israeli occupation of the Palestinian territories of the West Bank and East Jerusalem al-Quds, which the Palestinians want as the capital of their future independent state.

Tags: Palestinian Israel West Bank
Short Link rasanews.ir/201nCq
Share
0
Please type in your comments in English.
The comments that contain insults or libel to individuals, ethnicities, or contradictions with the laws of the country and religious teachings will not be disclosed