Rasa - Several rockets have been fired at Baghdad's Green Zone following violent protests between police and supporters of cleric Muqtada al-Sadr which claimed the lives of at least seven people. 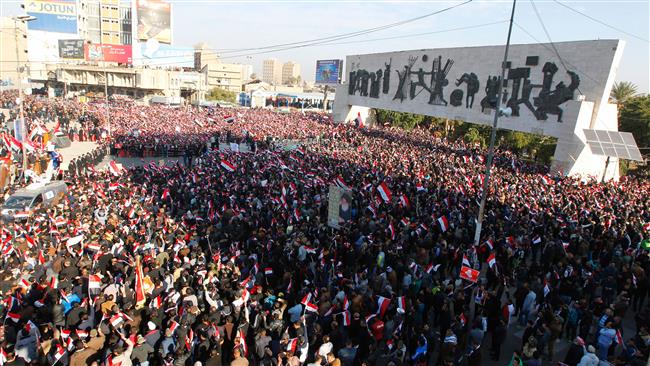 RNA - "Several Katyusha rockets fired from the Baladiyat and Palestine Street areas landed in the Green Zone," said Iraq’s Joint Operations Command in a statement, without referring the origin of the rockets.

No casualties have been reported from the rockets which landed in a parade grounds located in the center of the highly fortified region, which houses the country’s presidency, prime minister's office, parliament, and several key embassies.

"Several rockets, maybe six or seven, struck the Green Zone. I can hear the siren is being sounded in the area," said Maysoon Damaluji, an MP who lives inside the region.

Following the incident, several roads leading to the compound were closed down, while extra security was deployed throughout the city.

Earlier in the day, clashes erupted during protests between Sadr’s supporters and police that used rubber bullets and teargas to suppress the crowds.

"There were seven dead as a result of the violence. Two of them are from the security forces and the other five are protesters," said a police official.

He added that around 200 people were also wounded in the protests, mostly from inhaling teargas.

Sadr’s supporters were demonstrating to urge the government to amend the country’s electoral law. They argue that the country’s current electoral rules are tailored in favor of Iraq’s major parties, which they say are involved in nepotism and corruption.

Tags: Muqtada al-Sadr Iraq Baghdad
Short Link rasanews.ir/201nAD
Share
0
Please type in your comments in English.
The comments that contain insults or libel to individuals, ethnicities, or contradictions with the laws of the country and religious teachings will not be disclosed