​Trump will not be able to spark war with Iran

Rasa - US President Donald Trump us in no position to threaten Iran, and will not be able to spark a war with the country in the next couple of years as some analysts have suggested, says Professor Dennis Etler, an American political analyst who has a decades-long interest in international affairs. 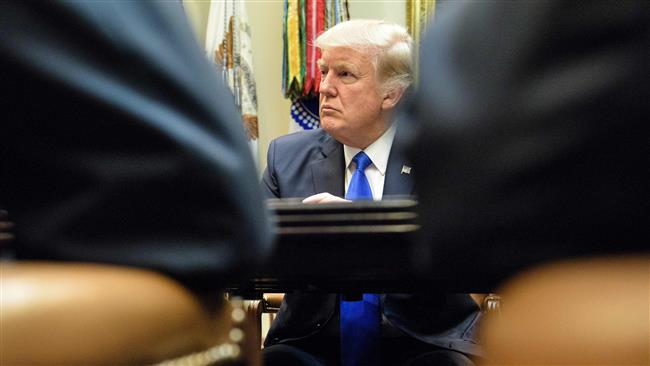 RNA - Award-winning Irish writer and journalist Patrick Cockburn wrote on Friday that Trump’s obsession with “Making America Great Again” combined with his demonization of certain countries could lead to war between the United States and Iran in a year or two.

Cockburn wrote that former US President Barack Obama deserves credit for escaping being sucked into “a broader conflict against Iran,” justifiably suspecting US allies in the Middle East like Saudi Arabia and (Persian) Gulf Cooperation Council states were “eager to see the US fight their battles for them.”

But Trump, who unlike Obama does not read books and does not have a sense of history, is not aware of the pitfalls the US needs to avoid a war with Iran, he noted.

Commenting to Press TV, Professor Etler said, “During Donald Trump’s campaign for the presidency he targeted both Iran and China as existential threats to US security, warranting special opprobrium.”

“The Iranian nuclear accords negotiated by members of the UN Security Council plus Germany and the EU were deemed the ‘worst deal ever negotiated’ and Iran was labeled the greatest purveyor of global terrorism. Trump declared that once he took office the nuclear deal would be unilaterally abrogated by the US,” he stated.

“China was depicted as having taken the best of the US in its trade relations, tantamount to rape. Trump said that on day one of his administration China would be declared a currency manipulator, and a 45% tariff on Chinese imports would be imposed,” the analyst said.

“Prior to his inauguration, he threatened to reassess the one China policy and his Secretary of State nominee suggested that China would be denied access to islands it controlled in the South China Sea. Such harsh rhetoric led many to conclude that the US under Trump’s leadership would directly challenge both countries and escalate regional and global tensions, perhaps leading to armed conflicts,” he noted.

‘Rantings and ravings of a neophyte politician’

“Upon assuming office however Trump has quickly backtracked on his campaign promises,” Professor Etler said.

“Regarding China, none of his policy pronouncements have been implemented. China was not declared to be a currency manipulator on day one, primarily because it isn’t; tariffs have not been imposed; talk of a military confrontation in the South China Sea has been dismissed by his Secretary of Defense and Trump himself has reassured Chinese President Xi Jinping during a personal phone call that the US will abide by the one China policy. All of Trump’s rhetorical hyperbole has been shown to be so much bluff and bluster signifying nothing,” he stated.

“The same scenario is also playing out in regards to Iran. Just today the European Union's foreign policy chief, Federica Mogherini, has been reassured during meetings with members of Trump's administration that the United States was committed to full implementation of the Iran nuclear deal,” the commentator observed.

“Trump’s previous threats have proved again be to the rantings and ravings of a neophyte politician with no knowledge of foreign affairs or how to conduct US foreign policy,” he said.

‘Trump is not a free agent’

“It should be clear to one and all that Trump is not a free agent. He is, in reality, a front man for a faction within the US deep state and ruling elite that wants to impose an extreme right-wing agenda domestically and a balance of power regime geopolitically. This is seen by his handlers as the only way to maintain US imperialist rule both at home and abroad,” Professor Etler said.

“The reason for Trump’s retreat from his bombastic rhetoric regarding both Iran and China is the sobering realization by his team that the US is in no position to follow through on his threats. There is also no prospect that the US will be able to do so during his first term in office,” he argued.

“Coupled with fierce resistance to his foolhardy travel bans and other domestic pressures Trump has suffered a severe credibility gap far earlier in his administration than any previous US president. It is thus extremely premature to say that Trump will be able to spark a war with Iran in the next couple of years as some suggest,” he pointed out.

“That however does not mean that Iran or China should let down their guard in any respect. In fact, both nations should be proactive and push back against any aggression mounted by the US against them. It is only by resolute action that US imperialism can be stopped in its tracks,” the scholar said in his concluding remarks.

Tags: Iran Trump
Short Link rasanews.ir/201n9p
Share
0
Please type in your comments in English.
The comments that contain insults or libel to individuals, ethnicities, or contradictions with the laws of the country and religious teachings will not be disclosed