Rasa - A ceremony was held in Syria’s northwestern city of Aleppo on Friday to commemorate the 38th anniversary of victory of the Islamic Revolution in a show of solidarity with Iran, which has thrown its weight behind Syria legitimate government since the onset of a civil war in 2011. 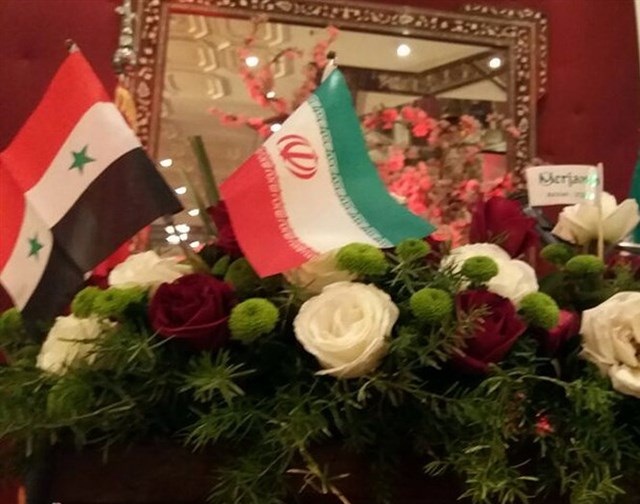 RNA - The event in Aleppo was organized by the Iran-Syria friendship popular committee, and was attended by Iranian and Syrian cultural figures.

Participants in the ceremony congratulated Iran on the anniversary of the Islamic Revolution’s victory, and commended Iran for supporting the Syrian nation during the hard times of a crisis that has gripped the Arab country for six years.

Christian and Muslim religious leaders were also present in the event.

Addressing the audience, Iran’s cultural attaché in Syria, Mostafa Ranjbar, said the Islamic Revolution does not belong to Iran alone, a sign of which is that the flag of Israel in Tehran was replaced with the Palestinian flag in 1979.

The Islamic Revolution is not merely Iranian, as Iran is also rejoicing at the liberation of Syria’s Aleppo, he noted.

On December 15, 2016, Syria announced the liberation of Aleppo from terrorist groups, with President Bashar al-Assad praising the victory as “history in the making and worthy of more than the word ‘congratulations’.”

In the meantime, Iran has remained a close ally of Syria and supports its legitimate government in the face of foreign-backed militancy.

Tehran insists that the Syrian nation is the only side that has the right to shape the future of its own country, rejecting foreign intervention with the use of force.

Tags: Iran Syria Aleppo
Short Link rasanews.ir/201n9Z
Share
0
Please type in your comments in English.
The comments that contain insults or libel to individuals, ethnicities, or contradictions with the laws of the country and religious teachings will not be disclosed