Rasa - The Rights advocacy group, Save the Children, said hundreds of children have been killed and more injured in attacks on civilian homes, schools and hospitals since the conflict escalated in March 2015. 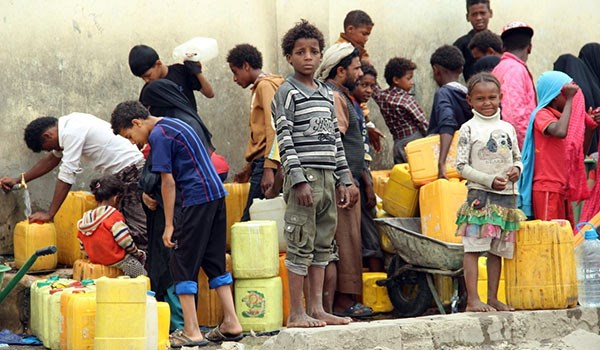 RNA - Save the Children also called for an international investigation into the war crimes committed during the Saudi-led campaign against the poor country of Yemen, NRT reported.

The rights group is helping Yemeni youngsters like 13-year-old Zuhair, an alias used by the charity to protect his identity, who was severely burned in an air strike by the Saudi-led coalition on a funeral ceremony last October.

"I saw a flashing light and smoke, lots of smoke. I saw many people lying on the floor dead, half of them were burnt," Zuhair said recalling the night of the attack.

He put out the flames that engulfed his clothes with his bare hands, an event which causes him to wake up in the night, screaming.

Save the Children is helping Zuhair and other children like him receive psychological support.

meanwhile, Britain's high court is preparing to hear on Tuesday a legal challenge seeking to ban the sale of UK arms to Saudi Arabia, with the landmark judicial review case at the high court is scheduled to last three days.

Charities such as Amnesty International, Human Rights Watch and Oxfam are expected to make submissions in court.

They will argue that the rules of customary international law require the UK to ensure that its arms transfers do not aid the commission of war crimes by Saudi Arabia.

"There are obviously breaches of international law all around on both sides, but what is absolutely for sure is that Saudi Arabia is a key ally of Britain's and the Saudi-led coalition has been killing children in Yemen and we really want that to stop. We also want it to be investigated where British munitions could be contributing to some of those deaths," said Save the Children's Director of Global Programs, Fergus Drake.

Drake has just returned from Yemen and said conditions for ordinary people caught up in the war were terrible.

Hospital wards are full of injured and skeletal children, who are dying from preventable diseases like diarrhea and pneumonia.

"What we are really calling for as a result of this High Court case is for Britain to stop selling arms to Saudi Arabia, for this external independent investigation to be established and also for the British government to be putting pressure on all sides in the conflict to come back to the peace negotiating table," Drake said.

Charities are calling on Britain and the wider international community to put the defense of children before the commercial interests of arms exporters.

Britain's high court is expected to issue its ruling in a few weeks time.

Tags: Yemen Saudi
Short Link rasanews.ir/201n87
Share
0
Please type in your comments in English.
The comments that contain insults or libel to individuals, ethnicities, or contradictions with the laws of the country and religious teachings will not be disclosed