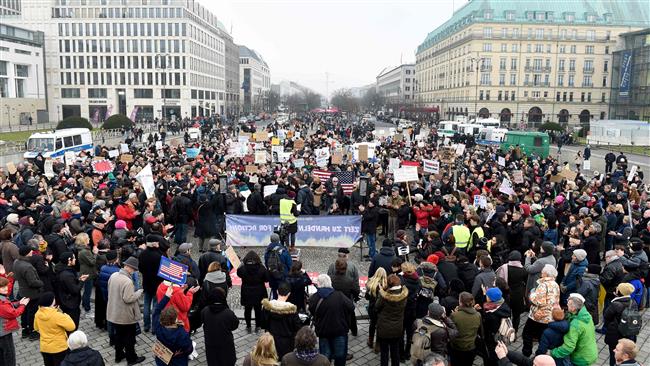 RNA - Thousands of protesters marched in 14 Canadian cities, including the capital, Ottawa, on Saturday, to denounce the ban.

“We have thousands of people gathered today against Islamophobia, white supremacy and deportations, in mourning about the deaths in Quebec City, and in opposition to Islamophobic and racist laws here in Canada and the United States,” said Syed Hussan, one of the organizers of the rally in Vancouver.

Trump on January 27 signed an executive order that imposed a temporary travel ban on citizens from Iran, Iraq, Libya, Somalia, Sudan, Syria, and Yemen and placed an indefinite ban on Syrian refugees. The move also suspended the admission of all refugees for 120 days.

However, the White House quickly defended the president’s decision as “lawful and appropriate” and said the US Justice Department would appeal to stop the judge’s order from taking effect.

Trump has come under immense pressure from politicians and rights groups to rescind the ban.

The measure has also created a global backlash with a growing number of countries, including long-standing US allies, which have criticized the curbs as discriminatory and divisive.

Meanwhile, major cities across Europe were also on Saturday the scene of massive protests against the US president’s controversial decision.

In London, an estimated 10,000 people gathered in front of the US Embassy, from where they began rallying down Park Lane and along Piccadilly toward Downing Street.

Chanting “Theresa May: Shame on You,” protesters denounced the British prime minister’s support for the new US president.

In the French capital of Paris, hundreds of protesters rallied near the Eifel Tower, holding anti-Trump placards.

Elsewhere, in the German capital, Berlin, demonstrators marched in front of the Brandenburg Gate, chanting such slogans as “Berlin knows only the weak build walls” and “Fight ignorance, not immigrants.”

Similar protests were also staged in Sweden’s capital, Stockholm, and the Spanish city of Barcelona.

Tags: US Trump EU
Short Link rasanews.ir/201n7N
Share
0
Please type in your comments in English.
The comments that contain insults or libel to individuals, ethnicities, or contradictions with the laws of the country and religious teachings will not be disclosed