Rasa - Thousands of people have gathered outside the US embassy in London to prepare for a protest against President Donald Trump for the second time this week. 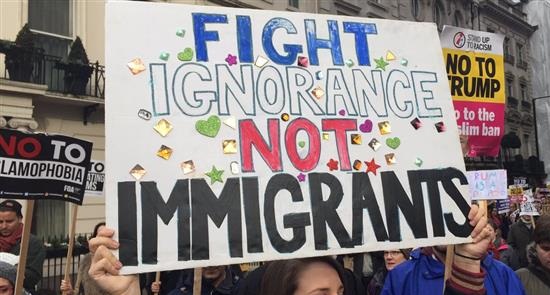 RNA - The demonstrators took to the streets on Saturday to denounce Trump’s order—signed last week—to bar all Muslims from Iran, Iraq, Syria, Sudan, Libya, Yemen and Somalia from entering the United States for 90 days and suspend the US Refugee Admissions Program for 120 days until the president determines they have been sufficiently changed.

The demonstration involved a two-mile (3-kilometer) rally of several thousand protesters from the US embassy to the Parliament. The people rallied down Park Lane and along Piccadilly towards Downing Street as they were chanting “Donald Trump has got to go” and “No ban, no wall."

They were holding black banners with blood stains bearing slogans such as “No to Trump. No to War.”

One protester, holding a placard reading “Make racists afraid again, said, “It’s absolutely time to take a stand. We’ve been sitting around complacent; the population has been way too complacent for way too long."

Kevin Courtney, the general secretary for National Union of Teachers (NUT) told the protesters that Trump’s policies were aimed at “stoking up fear.”

“I’m here to say that every teacher should be involved in the campaign against Trump,” he added. “We can fight Trump’s policies, we can fight that division.”

A lawmaker, Dawn Butler told the crowd that Prime Minster Theresa May should “understand the responsibility” of the UK’s relationship with the US. “The answer isn’t walls and the answer isn’t bans,” she added.

Many in the UK are angered by Trump's policies and demand May’s government to criticize it.

The protesters chanting  "Theresa May, shame on you!" also called on her to withdraw her invitation to Trump for a visit to Britain. During a visit to Washington last month, May confirmed plans for a return visit by Trump to her country expected in the summer.

An online petition calling for the prime minister to rescind Trump’s invitation has so far attracted strong support.

US District Court Judge James Robart of Seattle ruled on Friday in favor of a lawsuit seeking to overturn Trump's order that blocks the entry of citizens from seven predominately Muslim countries.

The White House denounced the ruling and described it as "outrageous.” Trump also took to tweeter and called into question the validity of the ruling by labeling Robart a “so called judge” and his “opinion” as ridiculous.

Tags: Muslim US Trump
Short Link rasanews.ir/201n77
Share
0
Please type in your comments in English.
The comments that contain insults or libel to individuals, ethnicities, or contradictions with the laws of the country and religious teachings will not be disclosed