UK in panic over Johnson’s remarks against Saudi regime 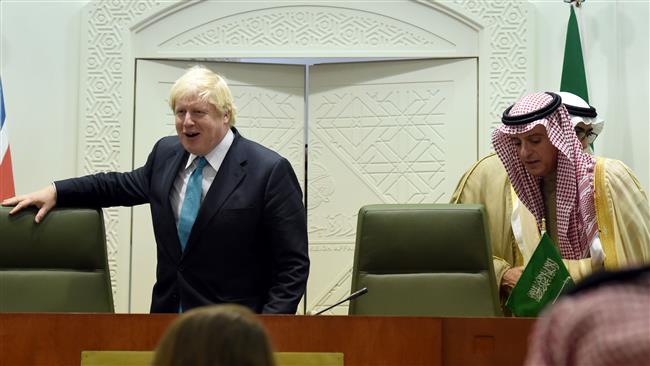 RNA - During a conference in Rome last week, Johnson blasted the Riyadh regime over its “proxy wars” in the Middle East and its unprovoked military aggression against Yemen, which has killed over 11,000 Yemenis since March 2015.

UK Prime Minister Theresa May’s spokeswoman immediately rebuked the remarks back then, saying the comments did not reflect “the government’s views on Saudi and its role in the region.”

Johnson’s statements divided the UK Parliament, with many of the lawmakers saying that he was stating the truth and should not face public chastisement.

UK Defense Minister Michael Fallon lashed out at the media on Sunday, for blowing the story out of proportions and confecting an artificial row between Johnson and the Downing Street.

“Let’s be very clear about this. The way some of his remarks were reported seemed to imply that we didn’t support the right of Saudi Arabia to defend itself... and didn’t support what Saudi Arabia is doing in leading the campaign to restore the legitimate government of Yemen,” Fallon said during a BBC interview.

“Some of the reporting led people to think that,” he added. “The way it was interpreted left people with the impression that we didn’t support Saudi Arabia and we do.”

Fallon said the months-long Saudi invasion against its impoverished southern neighbor was in self-defense, a right that London thought Riyadh was entitled to.

“The government’s view is absolutely clear – that what Saudi Arabia is entitled to do is defend itself from these attacks across its own border,” he said.

Johnson’s remarks came at a time when May was in the Middle East, trying to cement military and economic ties with [Persian] Gulf Cooperation Council nations – Saudi Arabia, the United Arab Emirates, Kuwait, Oman, Bahrain and Qatar.

Besides helping Bahrain with a heavy-handed crackdown on its popular uprising, Britain has also been providing weapons and intelligence to Saudis in the attacks against civilian targets in Yemen.

Tags: UK Saudi bahrain
Short Link rasanews.ir/201mk4
Share
0
Please type in your comments in English.
The comments that contain insults or libel to individuals, ethnicities, or contradictions with the laws of the country and religious teachings will not be disclosed