Rasa - The US and UK governments have discussed the possibility of airdropping supplies to the militant-held areas of the Syrian city of Aleppo, according to a new report. 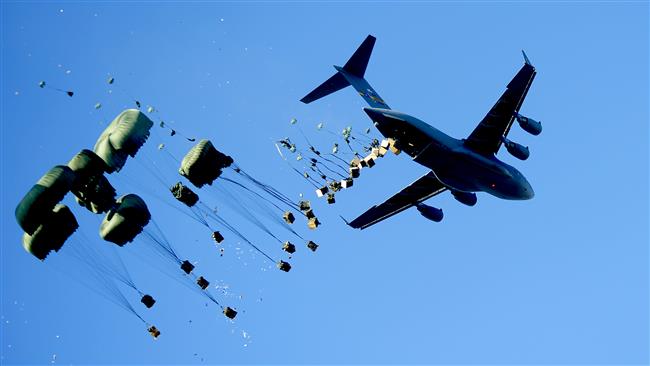 RNA - Officials from the two countries have been exploring possible ways of flying aid missions, with options ranging from parachute drops to edible drones that can be taken apart and eaten, The Guardian reported Sunday.

The report noted, however, that there has been little progress in the talks due to disagreements between government agencies. Military commanders have also been reluctant to get involved.

Moreover, London and Washington worry that such aid missions without permission from the Syrian government could lead to a direct confrontation with Damascus, hindering the ongoing aid deliveries.

Despite strong support by more than 200 members of the UK Parliament for British airdrops, the government has warned that the move would be hugely complicated and could endanger UK forces in the region.

Russia has also posed a great challenge to the plan, since Moscow has placed some of its most sophisticated air defense systems in Syria to defend its aircraft during its months-long campaign against Daesh and other Takfiri militants in the Middle Eastern country.

The last high-profile meeting took place in the UK embassy in Washington last week but failed to reach any conclusions as Syrian military forces had retaken a large chunk of the militant-controlled parts.

“There was talk in private that all this was too late,” said one of the participants in the meeting.

The UK-based Syrian Observatory for Human Rights said on Saturday that Syrian forces were in control of over 60 percent of Aleppo's militant-held areas.

The government’s advances have taken by surprise many of the foreign states that have been channeling financial and military support to the militants since the onset of the foreign-backed militancy in Syria in 2011.

Amid the victories, some countries, including France, have called for the implementation of a ceasefire in Aleppo, citing a need for secure corridors for the transfer of humanitarian assistance to the city.

The US has performed similar airdrops in the past, except that many of the supplies and weapons have ended up in the terrorists’ hands, raising question about the Washington’s true intent.

Tags: US Syria UK
Short Link rasanews.ir/201mhL
Share
0
Please type in your comments in English.
The comments that contain insults or libel to individuals, ethnicities, or contradictions with the laws of the country and religious teachings will not be disclosed