Rasa - Iranian Judiciary Chief Ayatollah Sadeq Amoli Larijani, who is on an official visit to Iraq, reiterated Tehran’s unwavering support for Baghdad and said backing the neighboring country is among the Islamic Republic’s “long-term strategies”. 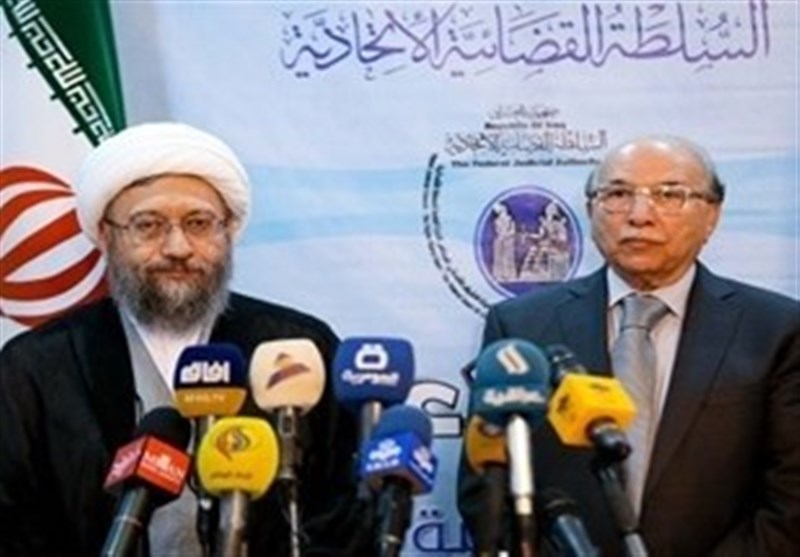 RNA - “We hope that Iraq, as an independent, unified, powerful and advanced country, will be able to play a more influential role in the region,” Amoli Larijani told reporters at a joint press conference with his Iraqi counterpart Medhat al-Mahmoud in Baghdad on Sunday.

The judiciary chief added that having such a neighbor would be definitely very important to Iran.

Mahmoud, for his part, hoped that his meeting with Iranian Judiciary chief would lead to development of bilateral judicial ties.

In reply to a question about definition of terrorism and terrorist groups, he said there is no difference of opinion between the two countries in this regard.

Amoli Larijani started his official trip to Iraq on Saturday to hold talks with senior officials of the Arab country on a range of issues, including ways to boost cooperation between the two neighbors in judicial fields.

Iraq has been facing the growing threat of terrorism, mainly posed by the Daesh (ISIL) terrorist group.

Daesh militants made swift advances in much of northern and western Iraq over the summer of 2014, after capturing large swaths of northern Syria.

However, a combination of concentrated attacks by the Iraqi military and the volunteer forces, who rushed to take arms after top Iraqi cleric Ayatollah Ali al-Sistani issued a fatwa calling for fight against the militants, blunted the edge of Daesh offensive.

Amid tensions in Iraq, Iran is known as the first country to help the Arab country and has always voiced support for Iraq’s solidarity and prosperity.

Tags: Iraq Ayatollah Sadeq Amoli Larijani
Short Link rasanews.ir/201mTZ
Share
0
Please type in your comments in English.
The comments that contain insults or libel to individuals, ethnicities, or contradictions with the laws of the country and religious teachings will not be disclosed