Rasa - Iranian Deputy Foreign Minister for Arab and African Affairs Hossein Jaberi Ansari says extremism and terrorism pose a serious threat to all countries across the world, reaffirming the Islamic Republic’s full support for Iraq in its anti-terror battle. 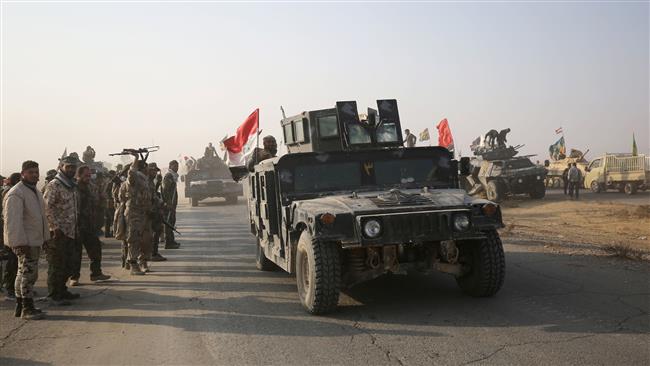 RNA - “Iran will continue with its all-out support for the Iraqi government and nation in the fight against terrorism,” Jaberi Ansari said in a meeting with Iraqi Deputy Foreign Minister for Political Affairs Nazar Khairallah in Baghdad on Sunday.

He added that Iran and Iraq must make joint efforts to find solutions to the ongoing crises and issues in the Middle East and hold bilateral and multilateral meetings to achieve such a goal.

The Iraqi official, for his part, said the campaign against terrorism is the most important priority of his country at the current juncture.

Khairallah added that Iran and Iraq have common interests and strategic relations and expressed hope that the two sides would further improve cooperation in all fields.

He voiced Baghdad’s readiness to make use of Tehran’s experience in economic and development projects.

The meeting between senior Iranian and Iraqi diplomats came as the Iraqi government soldiers, backed by allied fighters from the Popular Mobilization Units and Kurdish Peshmerga forces, launched a large-scale offensive to liberate the strategic city of Mosul on October 17.

Mosul has been under Daesh control since 2014. The terrorist group has described the city as its so-called headquarters in Iraq.

He added that 747 Daesh terrorists have also been killed and 88 others captured during the mentioned period.

Tags: Iran Iraq Iraq Terrorism
Short Link rasanews.ir/201mTY
Share
0
Please type in your comments in English.
The comments that contain insults or libel to individuals, ethnicities, or contradictions with the laws of the country and religious teachings will not be disclosed