Rasa - The resigned president of Yemen, Abd Rabbuh Mansur Hadi, has rejected a peace proposal by the United Nations special envoy for Yemen aimed at ending the 19-month war on the impoverished Arab country, saying the plan “rewards” the Houthi Ansarullah movement, which is backed by Yemeni people. 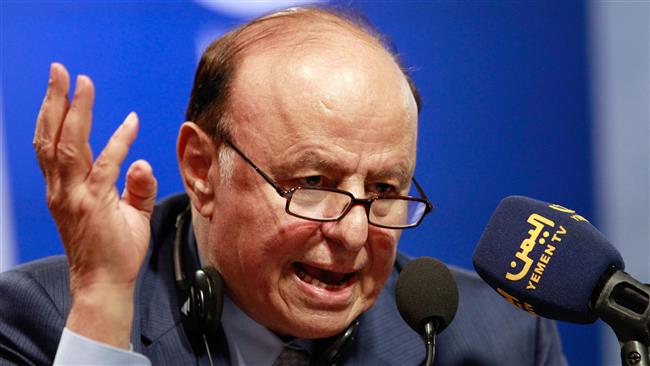 RNA - Hadi, who resigned and fled the capital, Sana’a, in March last year, made the remarks during a meeting with the UN Special Envoy to Yemen Ould Cheikh Ahmed in the Saudi capital of Riyadh on Saturday.

“The Yemeni people have condemned these ideas and the so-called road map out of belief that the deal is a gateway to more suffering and war,” a statement from Yemen’s Saba news agency quoted Hadi as saying, adding that the peace plan “only carries the seeds of war.”

Details of the roadmap, which include security and political arrangements, have not been made public, but according to informed sources, the proposed peace roadmap gives the Houthis, who are in control of large swathes of the country, including Sana’a, a share of the future government.

The plan also shrinks the president’s powers in exchange for the Houthis’ withdrawal from several major cities, including the capital, and the handover of their heavy weapons to a third party.

The president must also transfer power to the vice president, who in return appoints a new premier to form a new government, in which the Houthi-controlled north and the pro-Hadi south would have equal representation.

The Houthis are yet to comment on the peace proposal.

The UN envoy submitted the peace plan to Yemeni warring sides during a three-day visit to Sana’a, with aims to end the conflict. Ahmed has also held meetings with the Houthis and the General People's Congress to get their support for a return to a cessation of hostilities to allow aid deliveries.

Peace talks, which were held between Yemen’s opposing parties in Kuwait, ended in deadlock in August.

The Riyadh regime resumed its deadly airstrikes on Yemen on October 23, hours after a three-day truce in the conflict-ridden country expired.

The Houthi fighters took state matters in their own hands after the resignation and escape of Hadi, which threw Yemen into a state of uncertainty and threatened a total security breakdown in the country, where an al-Qaeda affiliate is present.

In support of Hadi, the Saudi military has been pounding its impoverished southern neighbor since March last year to undermine Houthi Ansarullah movement and restore power to Hadi.

Nearly 10,000 people, most of them civilians, have been killed in Riyadh’s military aggression, which lacks any international mandate.

Tags: Yemen UN Saudi
Short Link rasanews.ir/201mTM
Share
0
Please type in your comments in English.
The comments that contain insults or libel to individuals, ethnicities, or contradictions with the laws of the country and religious teachings will not be disclosed