Rasa - The current encounter between the axis of resistance and the US and its allies is a clear manifestation of existence of the Islamic Awakening movement, Secretary-General of the World Assembly of Islamic Awakening Ali Akbar Velayati underscored. 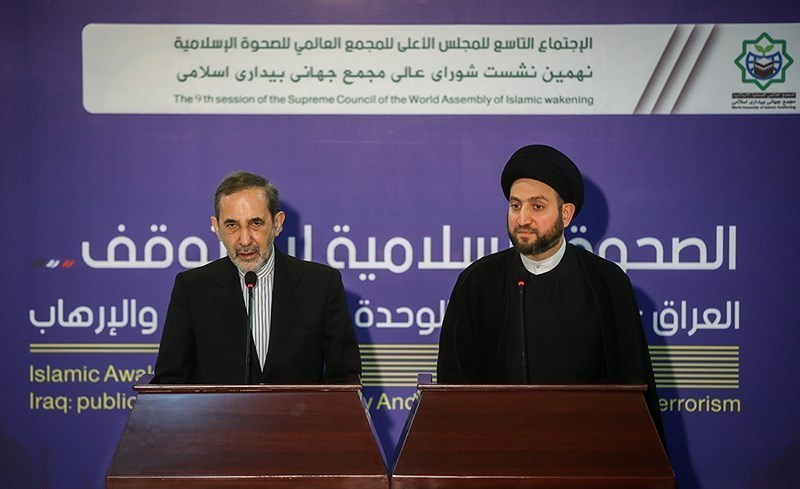 RNA - Speaking at a joint press conference with Head of the Supreme Islamic Council of Iraq Ammar Hakim in Baghdad on Thursday, Velayati highlighted the distinct signs of Islamic Awakening in the region.

The fact that Iraq has rid itself of US occupation, enjoys a “real, total and unique democracy in the Arab world” and has managed to overcome problems by relying on democracy is a “bright and glorious” manifestation of Islamic Awakening, he said in reply to a question by Tasnim about the status of Islamic Awakening in recent years.

The same situation exists in Syria, Velayati said, pointing to the wrong calculations of enemies of Syria, which had assumed that the Damascus government would fall and Syria would be partitioned within six weeks and the interests of the US and Zionists would be served.

“However”, he stressed “Syria’s people have been resisting for six years and have been able to break the back of their enemy, and this is another display of Islamic Awakening.”

Velayati also touched on Yemen, saying the “victorious and heroic” resistance of the Yemeni people in the face of attacks by a Saudi-led coalition for over a year and half, which will result in Yemen’s ultimate triumph, is one more brilliant sign of Islamic Awakening.

The comments came against a backdrop of the Western notion that the Islamic Awakening movement has been on the wane following the escalation of conflicts in the Middle East.

Tags: Velayati Hakim
Short Link rasanews.ir/201mPp
Share
0
Please type in your comments in English.
The comments that contain insults or libel to individuals, ethnicities, or contradictions with the laws of the country and religious teachings will not be disclosed