Rasa - Syria's President Bashar al-Assad says purging terrorists from the northwestern city of Aleppo is the only lawful way for the Syrian government to protect the civilian population in the embattled city. 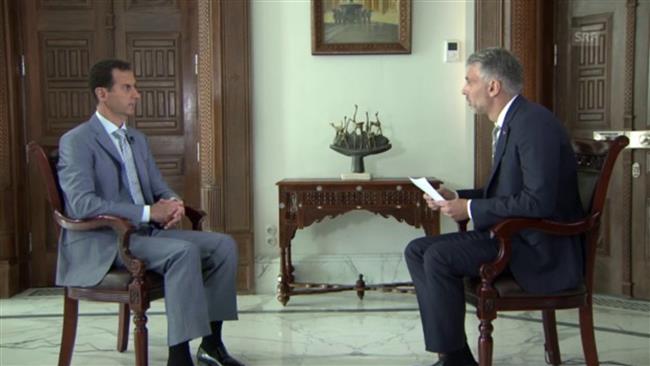 RNA - Assad made the remarks in an interview with Swiss SRF 1 TV channel which was conducted on Tuesday and posted on its website on Wednesday.

"That's our mission, according to the constitution and the law, that we have to protect people, that we have to get rid of those terrorists from Aleppo. This is how we can protect the civilians," he said.

President Assad further noted that it is not possible to protect civilians while they are being killed and remain under the full control of Takfiri militants.

“How can you protect them while they are under the control of terrorists?... Is it our role to sit aside and watch if that's how we can protect the Syrian people? We need to attack the terrorists, that's self-evident,” he added.

Aleppo, Syria’s second largest city, remains divided between government forces in the west and foreign-backed terrorists in the east, making it a frontline battleground.

On September 22, Syria announced the start of a new military operation in Aleppo aimed at driving out the terrorists occupying the eastern part of the strategic city.

The Syrian army campaign came three days after a week-long truce, brokered by Russia and the US, came to an end across the Arab country.

Damascus refused to extend the deal after an airstrike by a US-led coalition targeted Syrian troops, killing over 80 of them near the eastern city of Dayr al-Zawr.

On Tuesday, Moscow announced that the Syrian and Russian air forces had stopped their anti-terror air raids in Aleppo ahead of an eight-hour “humanitarian pause” in Aleppo scheduled for October 20.

Kremlin spokesman Dmitry Peskov hailed the halt as a "manifestation of goodwill by the Russian military.”

Syria has been gripped by foreign-sponsored militancy since March 2011. Moscow has been conducting airstrikes against Daesh and other terrorist groups in Syria at the Damascus government’s request since last September.

The US-led coalition has also been purporting to hit Daesh positions in Syria since September 2014, but is has failed to accomplish its announced objectives. The bombing campaign has neither a UN mandate nor the permission of the Syrian government.

Tags: Terror Assad Syria Aleppo
Short Link rasanews.ir/201mPe
Share
0
Please type in your comments in English.
The comments that contain insults or libel to individuals, ethnicities, or contradictions with the laws of the country and religious teachings will not be disclosed