Rasa - The United Nations cultural and scientific agency has adopted a resolution reaffirming the right of the Palestinians to the al-Aqsa Mosque compound in the occupied East Jerusalem al-Quds. 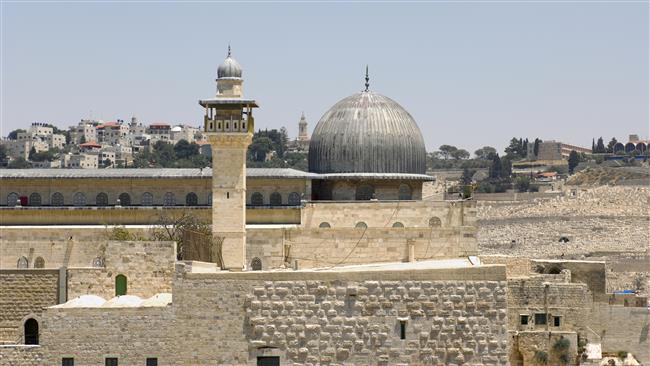 RNA - A spokesman for the Paris-based UN Educational, Scientific and Cultural Organization (UNESCO) said that the agency’s executive board passed the measure by consensus on Tuesday.

A draft of the resolution, titled "Occupied Palestine," had already been approved by the UNESCO commission last week.

Twenty-four countries voted in favor of the UNESCO resolution on October 11, twenty-six states abstained from voting, while six countries - the United States, Britain, Germany, the Netherlands, Lithuania and Estonia - opposed the motion.

The resolution slammed the Tel Aviv regime for hampering Muslims’ freedom of worship by “escalating aggression and illegal measures” regarding the holy site.

It further condemned the “continuous storming of al-Aqsa Mosque and Haram al-Sharif by the Israeli right-wing extremists and uniformed forces … [and] forceful entering by so-called ‘Israeli Antiquities’ officials.”

The draft resolution prompted a furious reaction from Israel as it suspended its ties with UNESCO.

Mounir Anastas, Palestine's deputy ambassador to UNESCO, said that the motion "reminds Israel that they are the occupying power in East Jerusalem and it asks them to stop all their violations," including archaeological excavations around religious sites.

It is the second time this year that UNESCO has approved an anti-Israeli resolution. Back in April, the organization passed a motion denouncing "Israeli aggressions and illegal measures against the freedom of worship and Muslims' access to the al-Aqsa Mosque.”

Palestine became the 195th full member of UNESCO in October 2011, triggering a cut in Tel Avis’s funding to the agency.

Al-Aqsa Mosque is the third holiest site in Islam after Masjid al-Haram in Mecca and Masjid al-Nabawi in Medina.

The occupied territories have already been the scene of increased tensions ever since Israeli forces imposed restrictions on the entry of Palestinian worshipers into the al-Aqsa Mosque compound in August 2015.

Tags: UNESCO Israel Palestine
Short Link rasanews.ir/201mPD
Share
0
Please type in your comments in English.
The comments that contain insults or libel to individuals, ethnicities, or contradictions with the laws of the country and religious teachings will not be disclosed