Rasa - Thousands of Yemenis have taken to the streets of the capital, Sana’a, to denounce a recent Saudi airstrike that left hundreds of civilians dead or injured and prompted global condemnations. 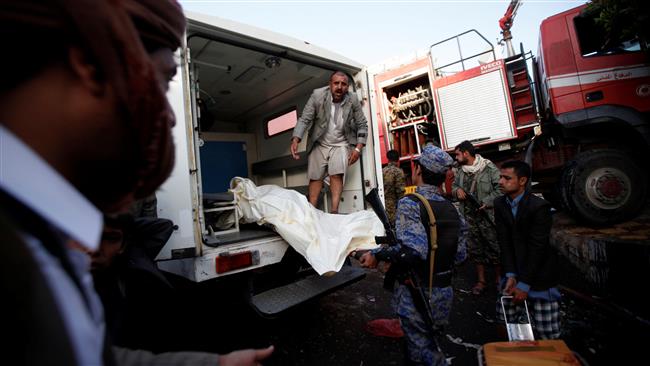 RNA - Carrying flags and placards, the demonstrators gathered outside the United Nations office in Sana’a on Sunday to express their outrage at the Saudi aggression against their country.

The protest rally was called by Yemen’s Supreme Political Council on Saturday.

More than 140 people were killed and over 525 wounded on Saturday, when the Saudi airstrike hit a community hall in southern Sana’a, where a funeral for the father of Interior Minister Jalal al-Roweishan was being held.

In another development on Sunday, Hamza al-Houthi, a senior member of the Houthi Ansarullah movement, accused the Saudi kingdom of trying to hide its crimes in Yemen to prevent the international bodies from decrying its misdeeds.

“Saudi Arabia’s denial of its crimes in Yemen at this time is a tactic used to cover them up and prevent investigative committees from exposing the dimensions of these crimes,” Houthi said.

The scenes of bombardment broadcast on TV are strong proof of the Saudi crimes in Yemen, Houthi further pointed out.

The official also called on the international community, with the United Nations at the helm, to take a practical and explicit measure in response to the attack.

The comments come after Saudi military spokesman Brigadier General Ahmed Asiri refused to take responsibility for the fatal aerial assault in Yemen, saying an investigation must be launched into the incident.

He also warned that the Yemeni forces would take revenge against the aggressors.

According to Yemen’s al-Masirah television, Yemeni armed forces fired missiles at the al-Karas military base in Saudi Arabia’s southwestern region of Jizan, killing some 25 Saudi troops and injuring tens of others.

A number of Saudi military vehicles were also destroyed in the operation.

The Yemeni army launched Katyusha missiles at a gathering of Saudi forces at another military position in Jizan.

Yemeni snipers also killed a Saudi soldier at the Matha’an military base in the same region.

Inside the Arab country, the Yemeni army’s artillery fire hit a gathering of pro-Saudi militants in Ta’izz Province, with no reports of casualties.

On April 19, Reuters cited unnamed diplomats as saying that around 400 Saudi soldiers and border guards had died ever since Saudi Arabia started the war against Yemen.

Saudi military officials say that they will not release figures on the number of military casualties until after the onslaught is over, according to the report.

Tags: Yemen Saudi
Short Link rasanews.ir/201mLd
Share
0
Please type in your comments in English.
The comments that contain insults or libel to individuals, ethnicities, or contradictions with the laws of the country and religious teachings will not be disclosed