Rasa – Hujjat al-Islam Ammar al-Hakim, the newly elected leader of the National Alliance, the largest political bloc in Iraq’s parliament, said he pursues integrity and greater efficiency with the inclusion of all Iraqi parties, including Muqtada al-Sadr’s al-Ahrar bloc. 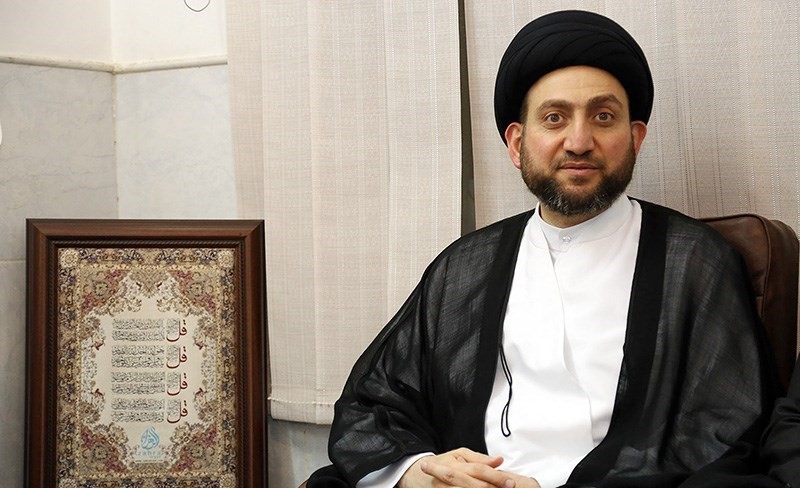 RNA – Hujjat al-Islam Sayyid Ammar al-Hakim, the head of the Islamic Supreme Council of Iraq (ISCI) who was elected as leader of the National Alliance on September 5, elaborated on the influential bloc’s plans for the future.

The National Alliance, comprising all Shi’a groups and partisan blocs, is the largest political bloc in Iraq in the post-2003 era that holds 185 out of 328 parliamentary seats.

Announcement of the new leader was an unexpected move that came without any prior reports of any change.

Over the past two years, there has been some discord within the National Alliance. Due to the lack of consensus on a new leader, the post had remained occupied by Foreign Minister Ibrahim al-Jafari, leader of the alliance following the August 2009 death of Supreme Council head Abdul Aziz al-Hakim.

Hujjat al-Islam al-Hakim said he will try to “unify and organize the alliance and improve its effectiveness.”

Asked about plans to bring the Shi’a parties together, al-Hakim said the National Alliance will be making decisions at three levels, namely the leadership council, the political council and the general assembly.

The tasks will be distributed among various working groups, each of which will deal with a special case, he explained.

As regards dissenting voices by the Muqtada al-Sadr-affiliated al-Ahrar bloc that was followed by a wave of protests against the policies adopted by the Baghdad government, Hujjat al-Islam al-Hakim hailed Sadr’s bloc as a major component and praised it for rejoining the alliance.

The National Alliance will be able to implement its reform plans very easily with the return of Sadr’s bloc, he added.

Outlining the parliamentary bloc’s plans, al-Hakim referred to the fight against corruption as a high priority.

Tackling corruption requires an inclusive scheme, which has been already drafted and will be put to the vote within the next days, the cleric added.

On the upcoming Iraqi parliamentary elections in 2018 and the formation of a new government, al-Hakim said Iraq needs strong unity and an inclusive scheme given a host of challenges, such as military confrontation with Daesh (ISIL) terrorist group as well as economic and security problems.

The National Alliance tries to attend the upcoming election in a more unified state, al-Hakim noted, adding that the bloc has also set up a special committee to that end.

As regards a long-awaited military operation to liberate the northern city of Mosul from the control of Daesh terrorists, al-Hakim said an exact day would be set by the prime minister alone, but made it clear that the operation is expected to include all Iraqi armed forces, including the Army and the Federal Police, Popular Mobilization Forces, tribal forces in Mosul, Peshmerga fighters and the counterterrorism units.

The Iraqi politician finally underscored that Mosul operation will not include any foreign ground troops, saying the American or other foreign forces will only have an advisory role or provide aerial support.

Iraq has been facing the growing threat of terrorism, mainly posed by the Daesh terrorist group, which made advances in northern and western Iraq over the summer of 2014, after capturing swaths of northern Syria.

Meanwhile, the Iraqi military and its allies are preparing to launch a large-scale offensive to liberate the northern city of Mosul, which Daesh has proclaimed its headquarters in Iraq. Mosul fell to Daesh terrorists in summer 2014.

Tags: DAESH Ammar Hakim Ammar al-Hakim ISIS ISIL Iraq Sayyid Ammar al-Hakim Iraq's Popular Mobilization Units
Short Link rasanews.ir/201mLX
Share
0
Please type in your comments in English.
The comments that contain insults or libel to individuals, ethnicities, or contradictions with the laws of the country and religious teachings will not be disclosed