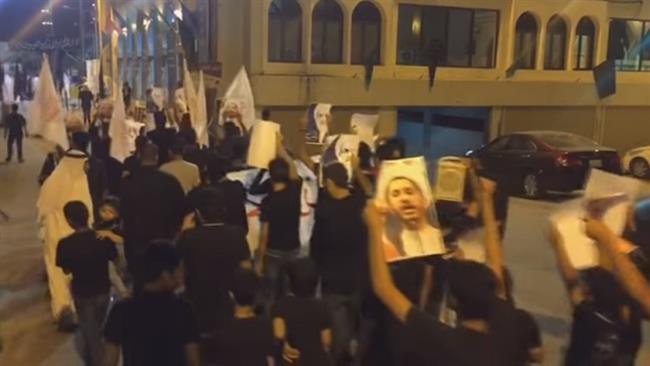 RNA – Protesters took to the streets in the town of A’ali southeast of the capital Manama on Wednesday evening to condemn new heavy-handed measures.

Muslims in Iran, Iraq, Bahrain, Lebanon and many other countries have been taking part in mourning ceremonies since the beginning of Muharram, the first month in the Islamic lunar calendar.

The first ten days of Muharram mark the martyrdom of the third Shi’a Imam and the grandson of Prophet Muhammad in 680 AD in a battle with the tyrant of the time.

The historic event’s message of resistance and rising up against tyranny has been key to the evolution of a culture which rejects abjection at any rate.

Bahrainis on Wednesday night chanted slogans and denounced the Manama regime’s disruption of mourning ceremonies and removing banners and flags about Ashura which marks the 10th day of Muharram.

Participants in the rally also held pictures of distinguished opposition figures, including Hujjat al-Islam Ali Salman and Hujjat al-Islam Isa Qasim. They pledged to press ahead with their resistance campaign against the Al Khalifah regime.

Protests have intensified in Bahrain since October when the supreme court of appeal rejected a request to release Hujjat al-Islam Salman, who is serving a nine-year prison sentence. The 50-year-old clergyman faces a new date on October 17 to have his case re-examined.

The tiny Persian Gulf kingdom is in fresh turmoil after Bahraini authorities decided to strip the country’s most prominent Shi’a Muslim cleric, Hujjat al-Islam Qasim, of his citizenship in June.

Tags: Bahraini Revolution Al-Wefaq Bahrain Islamic Society Bahraini Scholar bahrain
Short Link rasanews.ir/201mKW
Share
0
Please type in your comments in English.
The comments that contain insults or libel to individuals, ethnicities, or contradictions with the laws of the country and religious teachings will not be disclosed