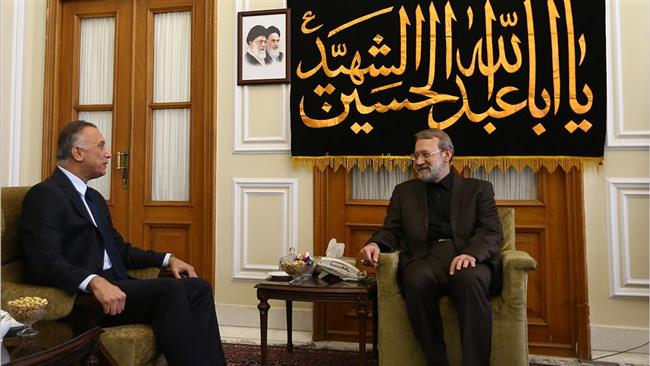 RNA - “The policy of the Islamic Republic of Iran on Iraq is [based on] supporting [the country’s] territorial integrity and strengthening unity and rapport among all Iraqi groups including Sunnis, Shias and Kurds,” Larijani said in a meeting with the head of Iraq's National Intelligence Service, Mustafa Kadhimi, in Tehran on Tuesday.

He added that the current issues in Iraq can be settled through unity among all Iraqi groups.

“The Islamic Republic of Iran has always stood by the Iraqi nation and government and is fully ready to provide any kind of assistance,” the top Iranian parliamentarian said.

He called on Iranian and Iraqi officials to make efforts in order to help settle the woes in the Arab country.

Warning about plots that aim to partition regional countries such as Iraq, Larijani said, “Some Western leaders believe that they can put an end to their problems in the region by dividing up countries while this is a completely wrong idea.”

He also stressed the importance of defending Iraq’s national unity and territorial integrity “with full force.”

Noting that Iraqi National Intelligence Service plays a prominent role in establishing security in the region, building confidence, and boosting unity in Iraq, Larijani added that wrong approaches taken by “some players” have put the region at risk more than ever.

Kadhimi, for his part, hailed Iran’s all-out and humanitarian support for the Iraqi government and nation and said his country’s forces are fully determined in the fight against Daesh terrorists.

The Iraqi official expressed hope that stability and peace would be restored to Iraq in the near future, adding that extremism and terrorism are the main challenges facing the region, which can only be eliminated through cooperation among all regional countries.

For months, Iraq has been preparing for the assault on Daesh in Mosul, which fell into the hands of the terrorists in 2014. Iraqi forces have managed to recapture all the other places that Daesh had seized, with the last major one being the city of Fallujah, which was liberated in late June.

The operation for Mosul is highly significant as estimates say about half of the city’s pre-war population of two million still remains there.

Based on available intelligence, Daesh has between 4,000 and 5,000 terrorists in the city, making the situation more complicated.

Gruesome violence has plagued the northern and western parts of Iraq ever since Daesh terrorists mounted an offensive there more than two years ago, and took control of swathes of Iraqi territory.

The militants have been committing heinous crimes against all ethnic and religious communities in Iraq, including Shias, Sunnis, Kurds and Christians.

Tags: Iraq Ali Larijani
Short Link rasanews.ir/201mK7
Share
0
Please type in your comments in English.
The comments that contain insults or libel to individuals, ethnicities, or contradictions with the laws of the country and religious teachings will not be disclosed