Rasa - The Yemeni Navy has warned Saudi Arabia and its regional allies against deploying military vessels to Yemen’s territorial waters in the strategic Red Sea and the Gulf of Aden, saying it would hit any such intruding vessels. 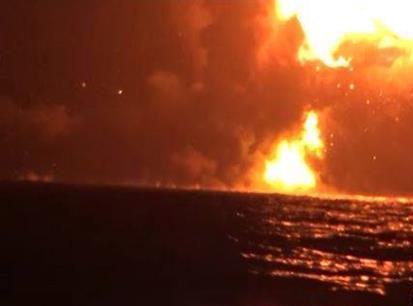 RNA - The Navy, in a statement released on Monday, announced that Yemeni forces will respond to any act of transgression into the waters of the Arab country or entry that has not obtained prior authorization from pertinent officials.

The statement added that the Saudi-led military coalition has been committing the most heinous crimes against the Yemeni people over the past one and a half years, ranging from the slaughter of children, women and elderly citizens to the bombing of markets, houses and critical infrastructure besides the killing of fishermen and ordinary people on the coasts and islands of Yemen.

The Navy reminded that Yemeni forces, backed by fighters from allied Popular Committees, launched missiles at an Emirati HSV-2 Swift catamaran off the shores of the Red Sea port city of Mokha on Friday, sinking it.

On October 10, 2015, Yemeni army forces destroyed a Saudi warship in a missile attack in the southwestern coast of Yemen, in the Bab-el-Mandeb Strait, which connects the Red Sea to the Gulf of Aden.

The development came only three days after Yemeni forces managed to destroy another Saudi vessel in the area, with reports saying that the sunken ship had repeatedly fired rockets at residential areas in Ta’izz Province.

Meanwhile, Yemen’s former president Ali Abdullah Saleh has described Saudi Arabia as an “age-old enemy,” stating that the Al Saud rulers must stand trial for the ongoing war against Yemen.

The Yemeni people must exact revenge on those who viciously attacked their country and killed men, women, and children in cold blood, Saleh wrote in a post published on his Facebook page.

The former Yemeni president also warned against attempts to weaken the General People’s Congress political party — his party — calling for vigilance and efforts to frustrate those bids.

Yemen has been under Saudi military strikes since late March 2015. The war was launched in a bid to reinstate Abd Rabbuh Mansur Hadi, who has stepped down as s president but is now seeking to grab power by force.

The United Nations puts the death toll from the military aggression at about 10,000.

Houthi Ansarullah fighters, allied Yemeni army factions, and forces loyal to Saleh have united and are fighting back the Saudi invaders.

Tags: Yemen Saudi
Short Link rasanews.ir/201mK1
Share
0
Please type in your comments in English.
The comments that contain insults or libel to individuals, ethnicities, or contradictions with the laws of the country and religious teachings will not be disclosed