Rasa - Members of the largest Iraqi political bloc have elected the head of the Islamic Supreme Council of Iraq (ISCI) Party as their new leader. 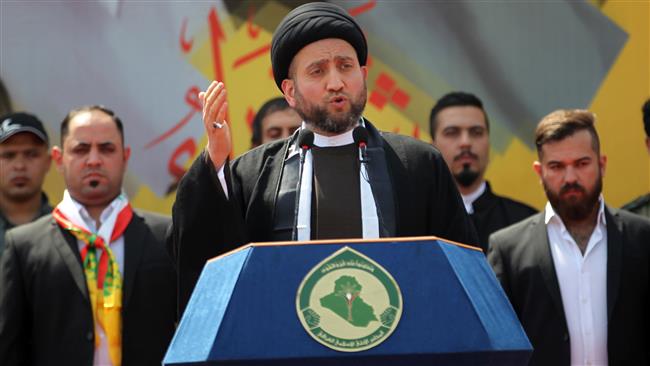 RNA - An informed source said on Sunday that Ammar al-Hakim, the leader of the ISCI, has been appointed the head of the Iraqi National Alliance (INA) for one year, Iraq’s al-Sumaria news website reported.

The appointment came at the end of a meeting held by the alliance’s members to discuss a number of political and security issues on Sunday.

Hakim will now be replacing Iraq’s Foreign Minister and former Prime Minister Ibrahim Jaafari as the head of the alliance.

The INA, which comprises Shia political parties, has the majority of seats in the parliament and accordingly has the right to form the government and appoint the prime minister.

The alliance includes four political parties, namely the State of Law Coalition, headed by Nouri al-Maliki, the ISCI, the National Reform Trend Party, headed by al-Jaafari, and the Sadrist Movement, with prominent Iraqi cleric Muqtada al-Sadr as its leader.

Iraq has been seeing protests over the Baghdad government’s inability to fight state corruption.

Thousands of people in Iraq, including government employees, staged a two-day walkout along with a hunger strike on Sunday following a statement that had been issued by Sadr two days earlier calling for the protest action.

Over the past few months, hundreds of Iraqis have been gathering at Tahrir (Liberation) Square in the Iraqi capital, Baghdad, and elsewhere in the country every Friday, urging the containment of corruption and also the formation of a technocrat government in the country.

The establishment of such a government has been stalled by persisting differences among various Iraqi political factions.

On May 20, Abadi called on the nation to set aside political differences and unite against the Takfiri Daesh terrorist group, which has been ravaging the country since June 2014.

Tags: Ammar al-Hakim Iraq Islamic Supreme Council of Iraq
Short Link rasanews.ir/201m6M
Share
0
Please type in your comments in English.
The comments that contain insults or libel to individuals, ethnicities, or contradictions with the laws of the country and religious teachings will not be disclosed