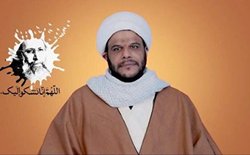 Hujjat al-Islam Hasan Salih stated, “The normalization of relations with the Zionist ‎regime represents the surrender of the dignity of the Islamic ummah because this ‎regime is trying to divide the Islamic countries.”‎

RNA – In an exclusive interview with Rasa News Agency, Hujjat al-Islam Hasan Salih, a ‎‎human rights activist and an opponent of the Saudi regime, described the American ‎presence ‎in the region as an evil act and referring to a statement by the late founder of ‎the Islamic ‎Revolution, Imam Khomeyni, he said, “From the very beginning, he ‎described the scene of ‎the American presence in Southwest Asia well.”‎

Referring to the normalization of relations between some Arab countries and the ‎Zionist ‎regime, he noted that such actions represent the surrender of the honour and ‎dignity of the ‎Islamic ummah because this regime is trying to divide the Islamic ‎countries.‎

Hujjat al-Islam Salih added, “Imam Khomeyni, with his foresight, announced ‎International al-‎Quds Day to emphasize the religious duty of Muslims towards the ‎Palestinian issue ‎and keep it alive in their memories.”‎

It is worth mentioning that International al-Quds Day is celebrated on the last Friday of ‎‎Ramadhan. It was established in 1979 by Imam Khomeyni as an official day to support ‎the ‎Palestinian people and called on Muslims around the world to join together to cut ‎off the ‎hands of the Zionist regime and its supporters.‎

Meanwhile, the International al-Quds Day campaign will be held on social media from ‎‎6:30 ‎am from Thursday to Saturday evening with the ‎‏#القدس_درب_الشهداء‏‎ (Arabic) ‎and #FlyTheFlag ‎‎(English) hashtags.‎