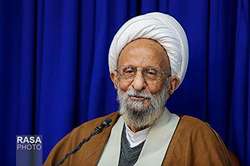 RNA – In a speech on epistemology, Grand Ayatollah Mohammad-Taqi Mesbah-Yazdi, ‎‎the head of Imam Khomeyni Educational and Research Institute in Qom, spoke on the ‎‎subject of evil and tribulations and said, “Today, the Coronavirus has spread to other ‎‎countries and is becoming more widespread day by day.”‎

The revered source of emulation added, “There are many questions about such issues ‎‎from different strata of society, which can be examined in two theoretical and practical ‎‎areas. Sometimes, intellectually, we want to know what is the rational justification for ‎‎the existence of disasters and tribulations, which is a theoretical discussion, but ‎‎sometimes we want to know the duty of mankind in this manner which is a practical ‎‎discussion.”‎

He said that the issue of evil has ‎always been raised, “The materialist tendency says ‎that the world has always been like this and has no particular reason, this tendency will ‎not enter into the discussions on the divine, theology and the wisdom of creation and ‎will be set aside.”‎

Ayatollah Mesbah-Yazdi continued, “When we say that the world was created by a ‎Creator, goodness can be ‎considered as a result of divine wisdom and prudence, but ‎what should we say in times ‎of evil, considering the importance of discussing those ‎issues from ancient times, they have ‎believed in dualism and said that there are two ‎sources of good and evil.”‎

His Eminence stated, “Other people said that God created everything, ‎including the ‎devil, that is, God is good, and the evil of the world is related to the ‎devil. What is ‎related to monotheistic beliefs and divine religions, especially Islam, is ‎that the whole ‎universe has a creator who has all the attributes of goodness and ‎perfection, and there ‎is no imperfection in Him, and He has created everything with ‎wisdom.”‎

The member of the Society of Seminary Teachers of Qom said, “It is asked why evil was ‎created, and how it can be rationally justified why God, the Wise One, who has no ugly ‎traits and is purely good and wants nothing but good, has created evil.” ‎

Ayatollah Mesbah-Yazdi noted, “There have been very deep and long discussions ‎throughout various periods, the result of which goes back to the statement that evil is ‎not a creature but a non-existent matter.”‎

The representative of the people of Khorasan Razavi province in the Assembly of ‎‎Experts added, “Muslims and divine religions believe that in eternal life there are two ‎houses ‎of good without evil and evil without good. This raises the issue of why God ‎created ‎hell and what would have happened if he had not created it and all people went ‎to ‎heaven and there was no harm to God.”‎

He stated that sometimes a person does something that leads to evil reaching him and ‎said, “For example, if a person sins, the effects of sin will reach him, especially in the ‎Hereafter, which is a secondary and reactionary evil, but the worldly evil is relative.”‎

Ayatollah Mesbah-Yazdi added, “For example, it is true that fire burns paper, but it ‎causes food to be cooked, ‎which means that its evil is relative, and it is good for some ‎things and evil for others. ‎What is a matter of discussion and doubt is evil concerning ‎human beings and pain and suffering.”‎

His Eminence said, “To understand why ‎evil exists, we must pay attention to why God ‎created mankind. Mankind is a creature who can ‎receive the highest divine grace by his ‎own free will.”‎

He continued, “This creature deserves the highest level of grace when it comes to ‎choice, there must be two ways to choose, and without it, choice makes no sense. No ‎creature like mankind has the capacity, and for mankind to be able to have different ‎levels of completion, he must be in a world where change can pave the way for ‎different choices in various fields so that the right choice paves the way for the highest ‎level of divine grace.”‎

His Eminence said, “Considering that the capacity of human beings is different, there ‎should be ‎different offers of good and evil. The answer is clear concerning the primary ‎and worldly evils, but there is a capacity in mankind that he can choose the path of ‎good for a while and then change course, and vice versa.”‎

He pointed out, “Those who make the wrong choice but have the principle of faith and ‎knowledge in their hearts, God’s grace requires that grounds for growth and ‎development be provided. One way is to suffer from afflictions to reduce one’s ‎belonging to this temporal world and possibly repentance from past sins.”‎

Head of the Supreme Leader’s Representative Office in Universities:‎

Despite Coronavirus, sanctions, Iran’s situation is better than developed countries