Rasa - Iran’s Islamic Revolution Guards Corps (IRGC) says it is continuing to closely monitor the activities of the Takfiri Daesh terrorist group even as the terror outfit has lost all of the territory that it once controlled as well as its organized structure. 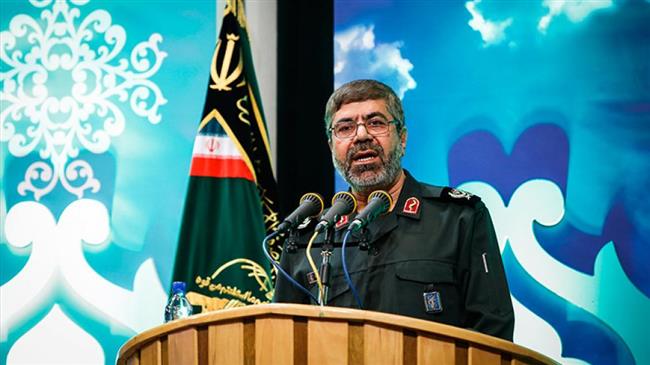 He said the IRGC had now obtained “a good knowledge” of the terrorist group.

Daesh started offensives in Iraq and Syria in 2014, occupying territory in the two Arab countries and establishing a self-proclaimed “caliphate.” Soon, the Iraqi and Syrian armies — both receiving advisory military help from Iran — galvanized to retake Daesh-held territory.

The terrorist group was gradually stripped of all the land it had occupied in the two Arab countries, and Iran’s Major General Qassem Soleimani, who commands the IRGC’s Quds Force, declared the end of Daesh’s territorial rule in a letter addressed to Leader of the Islamic Revolution Ayatollah Seyyed Ali Khamenei on November 21, 2017.

In his Saturday remarks, Brigadier General Sharif referred to Major General Soleimani’s letter, reaffirming that while Daesh was no more in control of territory and had no organized bureaucratic and logistical structure, it continued to promulgate its ideology and engage in subversive activities.

He said the IRGC would never allow the re-emergence of Daesh in Iran’s periphery.

Since losing the territory it had overrun, Daesh has been attempting to relocate to Afghanistan, where it has already gained a foothold.

Ayatollah Khamenei said recently that the United States was relocating Daesh to Afghanistan.

Ayatollah Khamenei said that in so doing, the US was attempting to rationalize its military presence in the region.

Since emergence in Afghanistan, Daesh has carried out a number of deadly terrorist attacks in the Asian country.

Ramezan stressed that the group should not be allowed to take root there.

Tags: DAESH IRGC Ayatollah Khamenei
Short Link rasanews.ir/201pVo
Share
0
Please type in your comments in English.
The comments that contain insults or libel to individuals, ethnicities, or contradictions with the laws of the country and religious teachings will not be disclosed